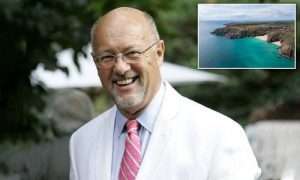 (DAILY MAIL UK) – Tycoon yachtsman Peter de Savary, who built a property empire boasting both Land’s End and John o’Groats despite being expelled from school aged 16 after allegedly being caught in bed with the headmaster’s au pair, has died suddenly at the age of 78.

De Savary, who was one of Britain’s most colourful characters, died at the weekend.

His third wife Lana told the Mail: ‘Peter was extraordinary, not just as a businessman but as a wonderful mentor, loving husband and father of five daughters.

‘He was remarkable, an enormous gap will be left in our lives.’

It is understood that de Savary died near his houseboat on the River Thames at Chelsea.

He put his Cotswolds mansion on the market for £10.5million in 2016 so that Lana would not be burdened with the 207-acre Manor Hall estate after he was gone.

‘I don’t want to risk leaving her with a house of this size to cope with single-handed,’ he said at the time.

The son of a French-born Essex farmer, de Savary was expelled from Charterhouse School aged 16 after allegedly being caught in bed with the headmaster’s au pair.

He made his first million by the time he was 30, after setting up an import-export business selling goods to Africa.

He then amassed a fortune from the regeneration of industrial wasteland.

He had interests in shipping and petrol but is probably best known for his work in hospitality. He founded the St James’s Club franchise with venues from London and Paris to New York, Los Angeles and Antigua.

He also started the Carnegie Club at Skibo Castle in Scotland, which was the backdrop of Madonna’s wedding to Guy Ritchie in 2000.

While travelling with his family from the Caribbean in 1987, he was in a plane crash that left one of his young daughters having to be revived on the beach.

The near-death experience proved pivotal. ‘At that point, my philosophy on life changed,’ he said.

‘When you genuinely look death in the eye, you know it’s a pretty tenuous thing we’re hanging on to.’

De Savary announced he would not be leaving any of his reputed £100 million fortune to his five children, explaining: ‘They will not be given the responsibility and the awesome task of trying to preserve or augment or carry on any of my efforts.’