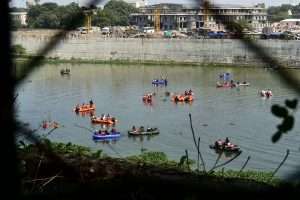 (AFP) — Nine people were arrested Monday in connection with the collapse of a pedestrian bridge in western India that killed at least 137 people, police said.

The bridge, which had reopened days earlier after renovation, collapsed on Sunday evening, sending hundreds tumbling into the river or clinging to the wreckage while screaming for help in the dark.

The nine — all associated with a company that maintained the bridge in Morbi — were being investigated for culpable homicide not amounting to murder, senior police officer Ashok Kumar Yadav said in a statement.

Crowds at the site had been celebrating the last day of the Diwali holiday. CCTV footage showed the nearly 150-year-old structure swaying — with a few people apparently deliberately rocking it — before it suddenly gave way.

“We were all standing on the bridge together when it violently shook and crashed suddenly. I heard screams and a loud thud and then there was silence. Then slowly cries and screams,” survivor Madhvi Ben, 30, told AFP.

Ben said one of his legs was “entangled in a steel rope”, leaving him almost entirely submerged and struggling to break free.

“I somehow blocked my nose and pulled myself up and released my leg from the wire. I grabbed another wire and climbed the remains of the bridge.

“Someone held my hand and pulled me out of the water before I reached the bank.”

Local police chief P. Dekavadiya said that by Monday afternoon the death toll from the catastrophe in Prime Minister Narendra Modi’s home state of Gujarat had risen to 137.

They included around 50 children, the youngest being a two-year-old boy.

One local MP, Kalyanji Kundariya, told media he had lost 12 family members in the accident, including five children.

“My brother’s body was fished out at 9:00 pm and my sister-in-law’s body was recovered at 1:00 am,” textile trader Puneet Pitroda, 35, told AFP at Morbi’s crematorium on Monday.

“The authorities are fully responsible for the tragedy. They allowed hundreds to gather on the bridge when it had a capacity to hold just a small number,” he said.

“We will never forget this night.”

Authorities launched a rescue operation immediately following the collapse, with boats and divers searching the river all night and throughout Monday.

The bridge, 233 metres (764 feet) long and 1.5 metres wide, was inaugurated in 1880 by British colonial authorities and made with materials shipped from England, reports said.

The Gujarat tourist department describes the “grand suspension bridge” about 200 kilometres (120 miles) west of the state’s main city, Ahmedabad, as an “artistic and technological marvel”.

Sandeepsinh Jhala, Morbi municipality’s chief officer, said the bridge had not been issued a safety certificate after being closed for months of repair work.

Reports named the firm responsible as a unit of the Gujarat-based Oreva group, which describes itself as the world’s largest clock manufacturer, and also makes lighting products and e-bikes. The company could not immediately be reached for comment.

Modi, who was due to visit the site on Tuesday, said that he “may rarely have experienced so much pain in my life”.

Accidents from old and poorly maintained infrastructure, including bridges, are common in India.

In 2016, the collapse of a flyover onto a busy street in Kolkata killed at least 26 people.

Five years earlier, at least 32 people perished when a packed bridge collapsed in the hill resort of Darjeeling.