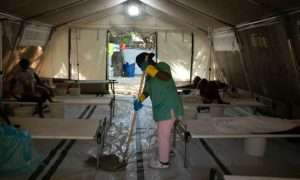 (CMC) – The United Nations (UN) Resident and Humanitarian Coordinator in Haiti, Ulrika Richardson, says Haitians are coming together to tackle the recent outbreak of cholera in the French-speaking country.

“I visited several cholera treatment centres in the most affected neighbourhoods of Port-au-Prince and saw heart-breaking scenes; children who were so malnourished, it was difficult to insert a drip into their arms or legs; adults who were clearly very ill,” she said.

“What immediately struck me was the intense smell of chlorine disinfectant, which is used to sterilise the immediate environment, clearly a sign that the facility is well run by health professionals, who know how to prevent and treat the disease. I saw staff continually scrubbing the floor and surfaces to ensure that the cholera bacteria could not spread further,” she added.

Richardson said she is deeply impressed and moved by the commitment and dedication of health workers, adding that she met many inspirational people, who have embodied professionalism.

She added that she has also met healthcare practitioners who have demonstrated humanity and huge empathy with patients under treatment.

“Many have told me that Haitians are coming together to get through this difficult time,” she said.

The UN is reporting that up until a few days ago, the increase in cholera cases had been gradual, but now health authorities are seeing a worryingly sharp increase, so the situation has become more challenging.

Figures released by the Department of Epidemiology, Laboratories and Research of the Ministry of Public Health show that as of October 23 this year, the total number of suspected cases in hospitals is 1,415 while there have been 41 deaths since the first death was recorded on October 2.

Richardson said that it is important to remember that although cholera can be deadly, it is preventable and treatable.

“Speed is of the essence to contain an outbreak and save lives,” she said.

“I believe the public health response from the Haitian authorities, local and international NGOs, with the support of the UN, was immediate and decisive, despite shortages of clean water, and the fuel needed to provide power to health facilities and enable staff to get to work,” she added.

Richardson also noted that cholera treatment centres were quickly established to care for the sick, noting that Haitians have lived through cholera before, so experience is extremely valuable to prevent the outbreak of the disease from getting out of hand.