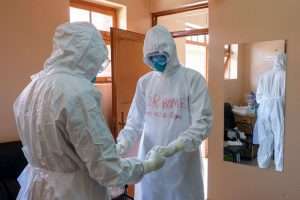 (AP) — Six schoolchildren in Uganda’s capital have tested positive for Ebola, the health minister said Wednesday, marking a serious escalation of the outbreak declared just over a month ago.

The children, who attend three different schools in Kampala, are among at least 15 people in the city confirmed to have been infected with Ebola, according to a statement by Health Minister Jane Ruth Aceng.

The children are members of a family exposed to the disease by a man who travelled from one Ebola-hit district, sought treatment in Kampala and died there, the statement said.

“He is responsible for infecting the family of seven, including the neighbours and many others,” the statement said, speaking of the travelling Ebola patient. “We were able to get this cluster, plus one other, because of the ministry’s vigilance in contact tracing and field case management.”

Authorities are “following up” 170 contacts from schools the six children attend, it said.

Fears that Ebola could spread far from the outbreak’s epicenter compelled authorities to impose an ongoing lockdown, including nighttime curfews, on two of the five districts reporting Ebola cases on October 16. The measures were put in place after a man infected with Ebola travelled to Kampala and died there, becoming the city’s first confirmed Ebola case.

Tracing contacts is key to stemming the spread of contagious diseases like Ebola.

The head of the Uganda Medical Association on Tuesday urged health authorities to impose a lockdown in Kampala, a stringent measure that the country’s president has previously said he doesn’t want to implement.

That official, Dr Samuel Oledo, told reporters the situation was alarming because some “people are not even reporting cases” of Ebola.

Ebola, which manifests as a viral hemorrhagic fever, has infected 109 people and killed 30 since September 20, when the outbreak was declared several days after the disease began spreading in a rural community in central Uganda.

Ugandan health officials in the district of Mubende, the epicenter, were not quick to confirm Ebola partly because the disease’s symptoms can mimic those of the more prevalent malaria.

Ebola is spread by contact with bodily fluids of an infected person or contaminated materials. Symptoms include fever, vomiting, diarrhea, muscle pain and, at times, internal and external bleeding.

There is no proven vaccine for the Sudan strain of Ebola that’s circulating in this East African country of 45 million people.

Ebola was discovered in 1976 in two simultaneous outbreaks in South Sudan and Congo, where it occurred in a village near the Ebola River, after which the disease is named.