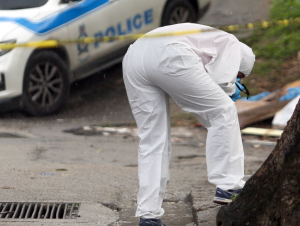 (TRINIDAD EXPRESS) – A DARING early-morning shooting in Diego Martin claimed the lives of four people yesterday, including a three-year-old boy and a 27-year-old woman, as they were returning home from a wedding in Maracas.

In all, six people were shot.

The child and the woman were pronounced dead at hospital while two men died at the scene. The parents of the boy were also wounded and remained hospitalised up to yesterday evening, said police.

The shooting took place around 1.20 a.m., along Diego Martin Main Road in the vicinity of Winnie Mohammed Road.

They all lived at La Puerta Avenue, Diego Martin.

Their murders have taken the country’s murder toll for the year so far to 487. Last year at this time there were 320 murders.

Investigators said at the time of the incident all six persons were in a silver-coloured Nissan B-15 car that was being driven north along the main road.

While doing so another car drove alongside it with the occupants of that car opening fire before speeding off and escaping.

The Nissan B-15 came to a stop after crashing into a wall.

Officers said a resident in the area who heard the commotion placed the child and his parents, Kadija Vilbara and Nicholas Owen, in his private vehicle and rushed them to the St James Medical Facility but the boy was pronounced dead on arrival.

Vilbara was shot to the chest while Owen received an injury to one of his fingers.

Minutes later, officers of the Four Road Criminal Investigations Department (CID) arrived on the scene and found Julien, Gloster and Noel in the car.

Gloster and Noel both appeared to be dead while Julien was still showing signs of life. She was placed in a police vehicle and taken to the St James facility where she, too, was pronounced dead on arrival.

Julien was the mother of three children, ages six, four and three months, none of whom was in the vehicle. Gloster was the father of the three-month-old.

Children listen to your parents

When the Express visited her home yesterday, Julien’s mother Eunice Julien spoke highly of her daughter.

She disputed earlier social media reports that the 27-year-old was involved in crime-related activities.

She said on Saturday Julien was her jovial self as she was preparing to attend the wedding later in the day.

“Her make-up was on point and she had on a beautiful red dress. Her sister did her make-up well. Chelsea was a very jovial girl, everybody liked her. She would make jokes and she loved her children,” she said.

The elder Julien said while she always heard news of people being murdered across T&T, she never thought it would have actually reached her home.

She said she oftentimes wondered how murderers slept at nights knowing that they were taking other people’s lives.

“They don’t care. How you going home and eat chicken and chips and drink coffee knowing you killed a little child and an innocent woman,” she said.

Regarding Julien’s three children, the woman said the four and six-year-old were with their father while the three-month-old Julien had with Gloster was being cared for by Julien’s sister.

She said up to yesterday afternoon the children did not know their mother had been killed.

“The six-year-old is autistic, so I did not tell her that her mother is dead. I just told her that she is sick and is in the hospital,” she stated.

And had this message for other children: “Children, listen to your parents.”

When asked to elaborate on her statement, Julien said she was not willing to comment further.

“All I want to say is listen to your parents. If you listen when your parents speak to you and you will do well on the Earth,” she stated.

Gloster was years ago charged alongside a number of other men from the Diego Martin area with the kidnapping and murder of Chaguanas businesswoman Vindra Naipaul-Coolman who was snatched from her Lange Park home in December 2006.

However, he never faced trial for the murder. In 2007, the Office of the Director of Public Prosecutions (DPP) discontinued the charge against him.

His younger brother, Keon Gloster, was the State’s main witness in the trial.

In 2016, all of those charged with the murder were found not guilty with the exception of Earl Trimmingham and Lyndon Charles.

Trimmingham and Charles are currently in prison awaiting a retrial.

Officers of the Region 1 Homicide Bureau of Investigations are continuing enquiries into the murders.