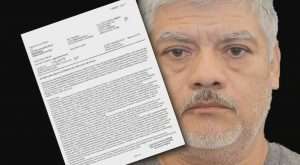 (JAMAICA OBSERVER) – A woman in Texas says she was infected with an incurable sexually transmitted disease (STD) after a janitor tainted water bottles at her office by “rinsing his penis in the water”.

Lucio Diaz, 50, who was caught committing the heinous act has been charged with indecent assault and aggravated assault with a deadly weapon.

“This individual is a sick man,” said the 54-year-old married mother of two. She did not want to be identified.

The woman disclosed that in August she decided to drink only from water bottles that she brought to work after she noticed a foul smell coming from the employee water dispenser at the doctor’s office where she worked.

However, the victim said in late September, she thought her own water bottle had been tainted with urine.

Screengrab of video of janitor Lucio Diaz, 50, who is accused of “rinsing” his penis in a woman’s water bottle, leading her with incurable STD. (Photo: abc15news)
Court records show a urinalysis confirmed it. But it was the spy camera that she bought that left no questions, she said.

Court records show Diaz is in Immigration and Customs Enforcement custody. The Mexican national’s immigration and work status are unclear. The victim said Diaz continued to work at the building even after management was notified, and is working with an attorney in relation to the incident.

“I want this to go to trial. I want him to be exposed for who he is, and I want him to pay for what he’s done to me and then be deported,” the victim said.