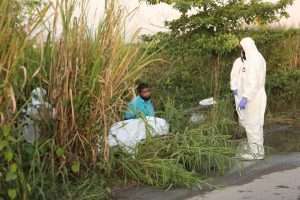 (TT GUARDIAN) – The dismembered bodies of two men were found dumped in a shallow river in Cunupiaon Monday and officials have described the gruesome findings to that of, “A poultry shop style killing.”

The body parts, entrails and heads of the two victims were found in garbage bags that had also been dumped in the river which crosses Mon Plaisir Road, in the area commonly referred to as Campo.

Around 1 pm on Monday, a man who claimed to be picking flowers for a Divali puja, stumbled upon what he believed was a body, which had been weighed down by a discarded mattress in the river.

He alerted officers who arrived to find “the foot” was the upper left leg of a male adult, which had been cut at the thigh and knee.

Meanwhile, the over-whelming scent of rotting flesh emanating from the mound of garbage bags which were close to the leg, led officers to believe that it contained the rest of the victim.

It was not until the arrival of the District Medical Officer (DMO) who gave the undertakers the go-ahead to bring the bags up from the river did investigators realise that the bags actually contained the remains of two men.

As officers combed the river bank looking for evidence, they found another leg floating approximately 100 feet up the river.

Investigators were forced to call on a second funeral home to assist in retrieving the remains, some of which were already being eaten by crabs and fish.

As dusk set in, the undertakers placed three trays which contained the human remains, alongside each other, for the DMO to examine.

As officers from the Cunupia Police Station and the Homicide Region Bureau III looked on, several people expressed surprise and horror at the type of killing and subsequent dismemberment.

One official remarked that it mimicked the type of killings often seen in South American countries such as Mexico and Colombia.

One man said, “Although I have worked in this business for a long time, this is the first time I have seen this type of killing.”

The killer (s) reportedly used an electric tool to cut off the victims’ heads, before slicing down the middle of the body, and slashing the legs at the thighs and knees.

The body parts and intestines were then bagged and dumped.

As farmers and residents traversed the lonely road yesterday and observed the police and media, only a few bothered to enquire as to what had happened.

As darkness set in, one driver pointed to the surrounding bushes and road which is without street lights and remarked, “This is a dumping ground for all kinds of things. I not surprised.”

Investigators agreed these types of killings were being seen with increasing frequency within recent times and pointed to the infiltration of a foreign culture which was distinct from the Trinidadian criminal behaviour of shootings and stabbings.

While the identities of the two victims were yet to be determined up to 8 pm on Monday, the men were believed to have been reported missing in the Central district on Saturday.

Investigators said the victims’ clothing will most likely have to be used to help in the identification process.

One of the victims was said to have a tattoo on his chest while there were no visible markings or tattoos on the second victim.