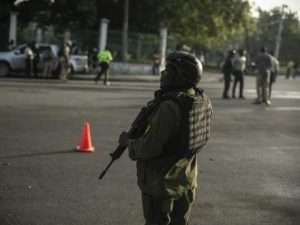 (AP) — The United States and Mexico said Monday they are preparing a United Nations resolution that would authorise an international mission to help improve security in Haiti, whose government issued a “distress call” for the people of the crisis-wracked nation.

US Ambassador Linda Thomas-Greenfield made the announcement at an emergency meeting of the U.N. Security Council as thousands across Haiti organised protests demanding the resignation of Prime Minister Ariel Henry.

The demonstrations came on the day the country commemorated the death of Jean-Jacques Dessalines, a slave who became the leader of the world’s first Black republic.

The US ambassador said the proposed “non-U.N.” mission would be limited in time and scope and be led by “a partner country” that was not named “with the deep, necessary experience required for such an effort to be effective.” It would have a mandate to use military force if necessary.

She said the resolution being worked on is a “direct response” to a request on Oct. 7 by prime minister Henry and the Haitian Council of Ministers for international assistance to help restore security and alleviate the humanitarian crisis.

It reflects one option in a letter from UN Secretary-General Antonio Guterres to the council on October 9 that called for the deployment of a rapid action force by one or several UN member states to help Haiti’s National Police.

Both Russia and China raised questions about sending a foreign armed force to Haiti.

Haiti has been gripped by inflation, causing rising food and fuel prices, and exacerbating protests that have brought society to the breaking point.

Daily life in Haiti began to spin out of control last month just hours after the prime minister said fuel subsidies would be eliminated, causing prices to double.

Gangs blocked the entrance to the Varreux fuel terminal, leading to a severe shortage of fuel at a time that rising prices have put food and fuel out of reach of many Haitians, clean water is scarce, and the country is trying to deal with a cholera outbreak.