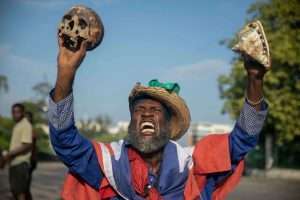 (AP) — Thousands across Haiti organised protests on Monday demanding the prime minister’s resignation as the country commemorated the death of Jean-Jacques Dessalines, a slave who became the leader of the world’s first Black republic.

The protests come hours before the United Nations Security Council is scheduled to meet and vote on several measures to tackle the increasingly chaotic situation in Haiti, which is awaiting a response on its recent request for the immediate deployment of foreign troops.

“The US needs Haiti to make its own decisions and not interfere in Haiti’s business,” said Marco Duvivier, a 35-year-old auto parts store manager, who had joined Monday’s protest in Port-au-Prince. “Life is not going to get better with an international force.”

Haiti has practically reached a standstill more than a month after one of the country’s most powerful gangs surrounded a key fuel terminal in the capital and prevented the distribution of more than 10 million gallons of gasoline and fuel and more than 800,000 gallons of kerosene stored on site.

Gas stations remain shuttered, hospitals have slashed services and businesses including banks and grocery stores have cut their hours as everyone across the country runs out of fuel.

The situation has worsened a recent cholera outbreak, with hundreds hospitalised and dozens dead amid a scarcity of potable water and other basic supplies.

During Monday’s protest, demonstrators hailed Dessalines, the leader of the anti-slavery revolution who was assassinated in 1806, as they rejected the potential deployment of foreign troops.

“We are the children of Dessalines,” said Samuel Jean Venel, a 40-year-old salesman.

Haiti’s last cholera outbreak was a result of UN peacekeepers from Nepal introducing the bacteria into the country’s largest river by sewage. Nearly 10,000 people died and more than 850,000 were sickened.

“We don’t need a foreign force. It’s not going to solve anything,” Jean Venel said. “As you can see, there is no result. There is more poverty, more insecurity.”

Over the weekend, the US and Canada flew equipment including armored vehicles that the Haitian government had bought for its police officers to help strengthen a department that has long been understaffed and under-resourced. It has struggled to fight gangs blamed for some 1,000 kidnappings so far this year and the killings of dozens of men, women and children as they fight over territory and become more powerful after the July 2021 killing of President Jovenel Moïse.