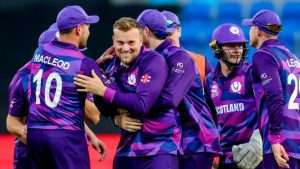 (SPORTS MAX) – Scotland, spearheaded by the superb bowling of Mark Watt and Michael Leask, claimed a shock win over West Indies to get off to a flyer at the T20 World Cup.

Having seen Namibia stun Sri Lanka on Sunday, Scotland sealed a famous 42-run triumph against the two-time T20 world champions at the Bellerive Oval in Hobart on Monday.

It was the first T20I meeting between the teams and brought up Scotland’s first win in the format this year. For the Windies, 2022 is now their worst year on record in terms of T20I defeats (14).

“Obviously it is a special win for us,” said Scotland captain Richard Berrington, whose side snapped a seven-game losing run in T20Is. “It took a lot of work and has given us belief.”

While the credit will go to Scotland’s brilliant bowlers, opening batter George Munsey set the tone with an unbeaten 66.

Munsey struck nine boundaries as he stayed at the crease throughout Scotland’s innings, guiding them to 160-5 as the Windies bowlers failed to get going.

Holder was the only Windies batter to step up and be counted, too, with his 38 the only score above 20 for Nicholas Pooran’s team.

Watt was fantastic, claiming 3-12 – his first wicket, when he bowled the dangerous Brandon King, sparking a collapse as the Windies lost six for just 21 runs to fall from 58-2 to 79-7.

“Tough loss for us, obviously disappointed,” said Pooran, who must rally the Windies for matches against Zimbabwe and Ireland.

“We have to work hard and win two games. We have to take accountability and responsibility.”