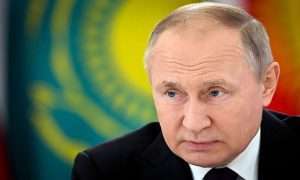 (AP) — Russian President Vladimir Putin said Friday he expects his mobilization of army reservists for combat in Ukraine to be completed in about two weeks, allowing him to end an unpopular and chaotic call-up meant to counter Ukrainian battlefield gains and to solidify his illegal annexation of occupied territory.

Putin — facing domestic discontent and military setbacks in a neighboring country armed with increasingly advanced Western weapons — also told reporters he does not regret starting the conflict and “did not set out to destroy Ukraine” when he ordered Russian troops to invade nearly eight months ago.

“What is happening today is unpleasant, to put it mildly,” he said after attending a summit of the Commonwealth of Independent States in Kazakhstan’s capital. “But we would have had all this a little later, only under worse conditions for us, that’s all. So my actions are correct and timely.”

Russia’s difficulties in achieving its war aims were becoming apparent in one of the four Ukrainian regions Putin illegally claimed as Russian territory last month. Anticipating an advance by Ukrainian forces, Moscow-installed authorities in the Kherson region urged residents to flee Friday.

Even some of Putin’s own supporters have criticized the Kremlin’s handling of the war, increasing pressure on him to do more to turn the tide in Russia’s favor.

In his comments on the army mobilization, Putin said the partial mobilization he ordered last month had registered 222,000 of the 300,000 reservists the Russian Defense Ministry set as an initial goal. A total of 33,000 of them have joined military units, and 16,000 are deployed for combat, he said.

Putin ordered the call-up to bolster the fight along a 1,100-km (684-mile) front line where Ukrainian counteroffensives have inflicted blows to Moscow’s military prestige. The mobilization was troubled from the start, with confusion about who was eligible for the draft in a country where almost all men under age 65 are registered as reservists.

Opposition to the order was so strong that tens of thousands of men left Russia. Kremlin critics expressed skepticism at Putin’s claim the mobilization would conclude at the end of the month. Activists predicted only a pause to allow enlistment offices to process regular conscripts during Russia’s fall draft for men ages 18-27, which was postponed this year from Oct. 1 to Nov. 1.

“Do not believe Putin about ‘two weeks.’ Mobilization can only be canceled by his decree. No decree – no cancellation,” Vyacheslav Gimadi, an attorney at imprisoned opposition leader Alexei Navalny’s Anti-Corruption Foundation, wrote on Facebook.

Asked about the possibility of an expanded mobilization, the Russian president said the Defense Ministry had not asked him to authorize one.

“In the foreseeable future, I don’t see any need,” Putin said, adding: “Nothing further is planned.”