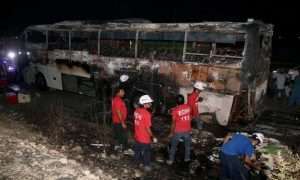 (AP) — At least 18 Pakistani flood survivors, including eight children and nine women, were killed when the bus they were traveling in caught fire, police said Thursday.

Police officer Hashim Brohi said the bus was taking the extended family from the southern port city of Karachi to their hometown of Khairpur Nathan Shah after they heard flood waters had receded there. They were among the thousands who moved to Karachi because of the country’s deadly flooding.

Brohi said the incident took place late Wednesday near Nooriabad hills hike, which is not far from the local police station and fire service station.

“The proximity saved the lives of many bus passengers as both the police and fire engine reached the scene in minutes,” Brohi said.

The bus caught fire after the air conditioning unit short-circuited.

He said rescue services moved the injured passengers to the main hospitals in Jamshoro and Nooriabad. The bodies, charred beyond recognition, will be handed over to relatives after legal formalities.

Bus fires are common in Pakistan, where safety standards are compromised and traffic rules are disregarded.