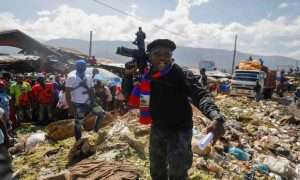 (AP) — A standoff between a powerful gang federation and Haiti’s government is testing how much power both sides wield and threatens to further derail a paralysed country where millions of people are struggling to find fuel and water.

A former police officer who leads a gang alliance known as “G9 and Family” has proposed his own plan for Haiti’s future — even seeking seats in the Cabinet — while demanding that the administration of Prime Minister Ariel Henry grant amnesty and void arrest warrants against the group’s members, a demand that so far has gone unanswered.

In mid-September, the gang surrounded a key fuel terminal to demand Henry’s resignation and to protest a spike in petroleum prices after the prime minister announced that his administration could no longer afford to subsidize fuel.

That move, coupled with thousands of protesters who have blocked streets in the capital of Port-au-Prince and other major cities, has caused major shortages, forcing hospitals to cut back on services, gas stations to close and banks and grocery stores to restrict hours.

In a recent video posted on Facebook, G9 and Family leader Jimmy Cherizier, who goes by the nickname “Barbecue,” read a proposed plan to stabilize Haiti that includes the creation of a “Council of Sages” with one representative from each of Haiti’s 10 departments.

The gang also is demanding positions in Henry’s Cabinet, according to the director of Haiti’s National Disarmament, Dismantling and Reintegration Commission, speaking to radio station Magik 9 on Thursday.

“It’s a symptom of their power, but also a symptom that they may fear what is coming,” Robert Fatton, a Haitian politics expert at the University of Virginia, said of the gang’s demands.

Henry and 18 members of his Cabinet appealed nearly a week ago for the deployment of foreign troops to quell violence and end the fuel blockade, a proposal that has yet to be formally discussed by the United Nations Security Council, which meets on Monday.

The gang, which has overpowered an understaffed and under-resourced police department, is likely wary of the potential deployment of specialized armed troops, Fatton said.

“They are trying to get the best deal they can get while to some extent they have the upper hand,” he said.

Gang demands are nothing new in Haiti, and they have grown more powerful since the July 2021 assassination of President Jovenel Moïse.

But such threats were quickly quelled in the past with the help of UN peacekeeping forces, Fatton said.