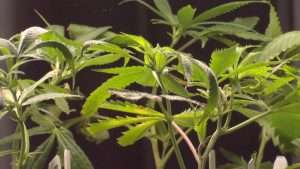 (CMC) – The Dominica government says it expects to table legislation that will give effect to the establishment of a marijuana industry by next year.

Speaking on a government programme on the state-owned DBS radio Thursday night, Prime Minister Roosevelt Skerrit, told listeners that his administration would be tabling the appropriate legislation in Parliament before year end.

As it stands now, a person with 28 grams of marijuana cannot be charged with an offence, while a household is allowed to grow three marijuana plants.

“We announced in this year’s budget to provide permits and licences for people who are in the production of marijuana oils, creams and lotions and soaps, because we recognise that there are a number of Dominican citizens who are suffering from cancer and who use the marijuana oil to bring some relief.

“There are many testimonies of it working, so we are in the process of putting the mechanism in place and certification of that which will also involve providing certificates for growers, farmers to be able to plant and grow this marijuana,” Skerrit said.

He said earlier this year with the support of the Canadian government, Dominica has received support in drafting the necessary legislation to deal with cannabis as a medicinal industry for export.

He said there were a number of processes to go through and the Canadians “through a project are helping us with that” adding that there is a national committee chaired by the Attorney General, Levi Peter, examining the legislation as well as “the various treaties we need to sign off on etc, etc.

“So we are moving apace and I believe come next year we will certainly be in a position to pass this legislation and to have a full-fledged cannabis industry in Dominica so we can take advantage of the numerous opportunities where cannabis is concerned,” Skerrit said.

Several Caribbean countries, most notable Jamaica and Barbados, have been moving towards establishing similar industries.