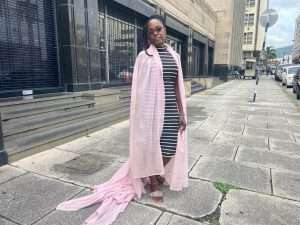 (TT GUARDIAN) – After being barred from entering the Treasury building to change cheques on Monday because her shoulders were exposed, Arouca caterer Allison Skinner-Bacchus draped herself in a curtain she had in her vehicle and unintentionally reignited the national debate on the dress code for government offices. However, the Minister of Public Administration said on Tuesday the policies are being reviewed.

In an interview with Guardian Media in front the Treasury yesterday, Skinner-Bacchus said she refused to accept the two options when she was refused entry—either returning home to change or purchasing something more “appropriate.”

“I walked away, went back to my car and the only thing was watching me was a plastic bag and a curtain and the curtain telling me—aye, look me here. So, I say come here, we going to the bank. So, I pick up my curtain, come back and as a normal Trini, I could’ve taken the curtain and throw it as a shawl over me but I needed to make a point,” she said.

“I didn’t know what the point was, at the time, so I open the whole curtain and drape it like a superhero (cape). When I came back here the security was in stitches…she opened the bank, ushered me in very politely. I went in the line, do my business, come back.”

She posted pictures of herself in front the building. It went viral, reigniting the debate on what government offices consider appropriate attire.

Under one of her friend’s reposts of the photos, many people recounted their own experiences with having to scrape together outfits to conduct business at other establishments.

Others commended her move, criticising the policy as archaic and reminiscent of T&T’s colonial history.

“Based on our climate, I think they need to revisit and revise some of the things they have. I understand, and I’m all for rules, I’m all for regulations, I am not about throwing out the baby with the bathwater – that is not what I am saying. What I’m saying is there are things that are unnecessary and I think this was an unnecessary case,” she said.

Contacted on the incident yesterday, Public Administration Minister Allyson West said the ministry is currently looking at it “with a view to making a recommendation.”

Asked whether this review was prompted by Skinner-Bacchus’ incident, she said the process began well before Monday.

“It is part of our overall programme to improve the service provided by the public service to the public,” she said.

Earlier this year, Tobago House of Assembly Chief Secretary Farley Augustine said all such codes would be removed for citizens accessing services at THA offices.