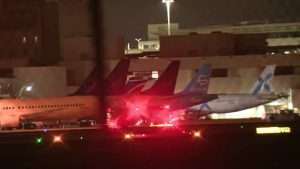 (AP) — An American Airlines flight from Miami to Barbados returned to the airport after fumes filled the cabin, officials said.

Flight 338 departed Miami International Airport on Wednesday night, but had to return due to a strong chemical odor coming from a passenger’s carry-on item, spokesman Greg Chin told The Associated Press.

Passengers and crew exited the plane on the airfield and were evaluated by Miami-Dade Fire Rescue, Chin said. They were then bussed back to the terminal.

American Airlines said in a statement that all customers were offered hotel accommodations. The flight was rescheduled for Thursday morning.

It was not clear how many passengers were on the plane.