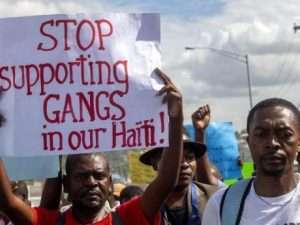 (CMC) – Haiti’s Prime Minister Dr Ariel Henry is urging the regional integration movement, of which his country is a member, to express solidarity and request assistance to alleviate  what has been termed “the deepening humanitarian, security, political, and economic crises in Haiti”.

A statement issued by the Guyana-based CARICOM Secretariat said Henry had written to the leaders of the 15-member grouping on the issue facing the French-speaking country where criminal gangs have virtually brought the country to a standstill by blocking roads to fuel depots and launching rival gang war.

In addition, opposition politicians have been staging demonstrations calling for the removal of Henry, who came to power following the assassination in July last year of President Jovenel Moise. The opposition are demanding fresh presidential and other legislative elections.

“The actions of criminal gangs have resulted in the complete cessation of fuel distribution in several parts of the country forcing the closure of hospitals and schools and the shutting down of water pumps prohibiting the provision of clean water. The water shortage also has exacerbated the resurgence of a cholera epidemic particularly in poor neighbourhoods,” CARICOM said in the statement.

It said regional leaders “condemn the callous and inhumane actions of the armed gangs responsible for the roadblocks limiting movement of the Haitian people and of goods, the destruction of life and livelihoods and the deprivation of the basic needs of the people.

“Heads of Government call upon all stakeholders in Haiti to come together with urgency at this critical juncture in the country’s history to bring an end to the protracted political stalemate in the interest of the people of the country and choose nation above self-interest.”

The statement said that the CARICOM leaders have reiterated “their willingness to facilitate meaningful dialogue and consensus building among Haitian stakeholders to support efforts at resolving the political stalemate.

“The proposed assistance includes institution building, implementation of free and fair elections when the required enabling conditions are met, and the establishment of a framework for long-term social and economic development.

“However, they recognise that these initiatives could not be effectively realised until the security situation is addressed. In that regard Heads of Government take note of the appeal by Prime Minister Henry for the urgent assistance of Haiti’s international partners for short term assistance to address the security and humanitarian crises,” the statement added.

On Sunday, the United Nations Secretary General, Antonio Guterres urged  the international community, including the UN Security Council, to consider “as of matter of urgency” the request by the Haitian government for the immediate deployment of an international specialized armed force in Haiti.

Guterres said that the force would address the humanitarian crisis, including securing the free movement of water, fuel, food and medical supplies from main ports and airports to communities and health care facilities.

The Secretary General has submitted to the Security Council a letter with options for enhanced security support to Haiti, as requested by the Council in its resolution 2645 (2022) and called on Haitian stakeholders to “rise above their differences and to engage, without further delay, in a peaceful and inclusive dialogue on a constructive way forward.

But the Senate in Haiti has approved a resolution urging Prime Minister Henry to postpone his request calling for international partners to immediately deploy specialized armed force.

The Senators are also urging the Protector of the Citizen “to request the expertise of the main organizations working in the human rights sector in order to obtain, as of now, humanitarian corridors which guarantee the exit of fuel from the terminals” as well as calling on Prime Minister Henry “to grant a reprieve to the implementation of the new fuel prices at the pump” so as to assist the poorest in the nation.