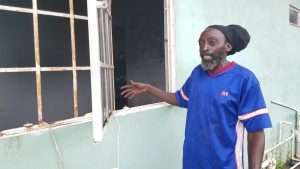 (TT GUARDIAN) – A Gasparillo woman is now in police custody after she allegedly tried to burn down her house with her two children inside this morning. Kerwin Smart, a neighbour, was passing and saw the smoke billowing from the roof and went to help.

He met the woman’s 21-year-old daughter and 11-year-old son coming from the back of the house at Dalloo Road.

She was bleeding from a gash across her hand. She told him that her mother allegedly chopped her, poured gasoline in her room while her brother was on the bed, locked the bedroom door and set fire to the house.

She broke a window through which she and her brother jumped through to escape the flames. Smart said using a neighbour water hose he was able to out the fire. The young woman and her brother are receiving medical attention.