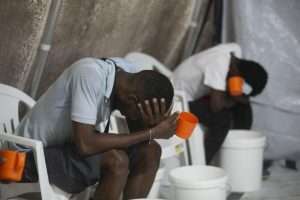 (AP) — A non-profit organisation on Tuesday called on Haiti’s government to release certain inmates amid a swift rise in cholera cases throughout the country’s severely crowded prison system and dwindling supplies of clean water.

Health through Walls, which provides medical care to prisoners in Haiti, noted that not only inmates are at risk, but also security guards, kitchen workers and health staff.

“Immediate action is necessary to avert more preventable deaths within the prisons,” the organisation said. “The situation has not been more dire.”

The call comes as Haiti remains largely paralysed by gangs and antigovernment protesters, leading to severe shortages of fuel, water and other basic supplies as the government calls for the immediate intervention of foreign troops.

US State Department spokesman Ned Price said Tuesday that the government is reviewing Haiti’s request for help in coordination with international partners.

“We strongly condemn all of those who stand in the way of the equitable and immediate distribution of much-needed humanitarian supplies,” he said. “This is a status quo that cannot persist, and we will continue to work and to speak with international partners on ways that we can facilitate the delivery of vital humanitarian assistance to the Haitian people, including critical medical support to address the cholera outbreak.”

Overall, Haiti has reported several cholera deaths and more than 100 suspected cases after announcing last week the first cholera deaths reported in three years. Since then, the number of cases has risen, particularly in prisons.

Medical staff working at the National Penitentiary in Port-au-Prince, which is Haiti’s largest prison with more than 4,000 inmates, have reported at least 20 deaths, five confirmed cases and another 200 cases of extreme diarrhea in just one week, said Michelle Karshan, co-founder of the nonprofit.

The cholera bacteria spreads easily and can cause severe diarrhea and dehydration that can be deadly.

Haiti’s 20 prisons hold roughly 11,000 inmates, and health advocates are extremely worried given that the occupancy rate in the country’s four main prisons exceeds more than 400 per cent. In addition, inmates have long faced a major shortage of food, water and medical care, according to a recent United Nations report.

This year alone, more than 180 inmates have died of severe malnutrition, according to a letter from the United Nations’ secretary-general that has not been publicised but was shared with The Associated Press on Sunday.

The United Nations also noted in its report that there is only one doctor for more than 1,000 detainees, and that drug deliveries are “rare and limited.”

“Detainees are entirely dependent on the care provided by charitable organisations,” it said.

Health Through Walls asked Haiti’s Justice Minister to release inmates who are critically ill, malnourished or those who have served their time but have not gone to trial, among others.

“Pretrial detention continues to fill the prisons and is creating additional stress in the justice system during this crisis period when basic needs cannot be met,” the organisation said.

More than 83 per cent of inmates have not yet been tried, with some waiting nearly a decade for their first court appearance, according to the UN report.

A spokesperson for Justice Minister Berto Dorcé could not be immediately reached for comment.

The nonprofit’s request comes just days after UN Secretary-General António Guterres noted in a letter to the Security Council that Haiti’s prison system needs to be improved, “considering the alarmingly overcrowded prison system.”

Haiti’s last cholera epidemic killed nearly 10,000 people. It began more than a decade ago after UN peacekeepers introduced the bacteria into the country’s largest river by sewage runoff from their base.

Among those who died was the director of Haiti’s National Penitentiary, Karshan said.