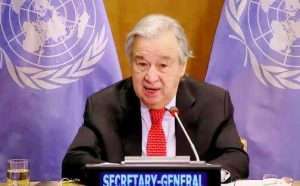 (AP) — UN Secretary-General António Guterres submitted a letter to the Security Council on Sunday proposing the immediate activation of a rapid action force following a plea for help from Haiti as gangs and protesters paralyse the country.

The letter, which was seen by The Associated Press but has not been made public, said the rapid action force would be deployed by one or several member states to help Haiti’s National Police. That force would “remove the threat posed by armed gangs and provide immediate protection to critical infrastructure and services,” as well as secure the “free movement of water, fuel, food and medical supplies from main ports and airports to communities and health care facilities.”

The letter also states the secretary-general may deploy “additional UN capacities to support a ceasefire or humanitarian arrangements.”

However, the letter notes that “a return to a more robust United Nations engagement in the form of peacekeeping remains a last resort if no decisive action is urgently taken by the international community in line with the outlined options and national law enforcement capacity proves unable to reverse the deteriorating security situation.”

The letter suggests that the rapid action force be phased out as Haitian police regain control of infrastructure, and that two options could follow: member states establish an international police task force to help and advise local officers or create a special force to help tackle gangs “including through joint strike, isolation and containment operations across the country.”

The letter notes that if member states do not “step forward with bilateral support and financing,” the UN operation may be an alternative.

“However, as indicated, a return to UN peacekeeping was not the preferred option of the authorities,” it states.

The letter also says the Security Council could decide to strengthen the police component of the current United Nations Integrated Office in Haiti known as BINUH, and to call on member states to provide additional equipment and training to local police, which are understaffed and lack resources. Only about a third of some 13,000 are operational in a country of more than 11 million people.

The secretary-general said the issue is a matter of urgency, noting Haiti “is facing an outbreak of cholera amid a dramatic deterioration in security that has paralysed the country.”

On Friday, Haiti’s government published an official document signed by Prime Minister Ariel Henry and 18 top-ranking officials requesting from international partners “the immediate deployment of a specialised armed force, in sufficient quantity,” to stop the “criminal actions” of armed gangs across the country.

The request comes nearly a month after one of Haiti’s most powerful gangs surrounded a key fuel terminal in the capital of Port-au-Prince, preventing the distribution of some 10 million gallons of diesel and gasoline and more than 800,000 gallons of kerosene stored on site.

Tens of thousands of demonstrators also have blocked streets in Port-au-Prince and other major cities in recent weeks, preventing the flow of traffic including water trucks and ambulances, as part of an ongoing protest against a spike in the prices of gasoline, diesel and kerosene.

Gas stations and schools are closed, while banks and grocery stores are operating on a limited schedule.

Protesters are demanding the resignation of Henry, who announced in early September that his administration could no longer afford to subsidise fuel.

The deepening paralysis has caused supplies of fuel, water and other basic goods to dwindle amid a cholera outbreak that has killed several people and sickened dozens of others, with health officials warning that the situation could worsen amid a lack of potable water and cramped living conditions. More than 150 suspected cases have been reported, with the UN warning that the outbreak is spreading beyond Port-au-Prince.

The outbreak comes as UNICEF warns that three-fourths of major hospitals across Haiti are unable to provide critical service “due to the fuel crisis, insecurity and looting.”

The US Embassy has granted temporarily leave to personnel and urged US citizens to immediately leave Haiti.

Haitian officials have not specified what kind of armed forces they’re seeking, with many local leaders rejecting the idea of UN peacekeepers, noting that they’ve been accused of sexual assault and of sparking a cholera epidemic that killed nearly 10,000 people during their a 13-year mission in Haiti that ended five years ago.

A Brazilian general and former UN peace mission leader who declined to be identified because he is still involved with the UN told The Associated Press this weekend that any peacekeeping mission would be established following a decision by the Security Council if it believes there’s a risk to international security.

The UN would send a team for evaluation, and then the Security Council would decide if money is available and which countries would be available for volunteering. He noted that a military mission could cost between 600 to 800 million dollars and would count with 7,000 military components, plus police and civil components.

“It is an ongoing crisis, which makes it difficult for short term solutions,” he said. “There needs to be international help, no doubt about that.”