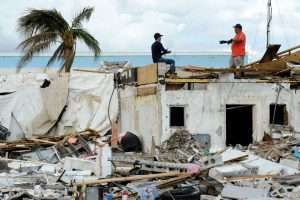 (AP) — Just days after Hurricane Ian struck, a crowd of locals gathered under a huge banyan tree at a motel’s outdoor tiki bar for drink specials and live music. Less than 10 miles away, crews were finishing the search for bodies on a coastal barrier island. Even closer, entire families were trying to get comfortable for the night in a mass shelter housing more than 500 storm victims.

On a coast where a few miles meant the difference between life and death, relief and ruin, the contrasting scenes of reality less than two weeks since the hurricane’s onslaught are jarring, and they point to the way disaster can mean so many different things to different people.

Arlan Fuller has seen the disparity while working in the hurricane zone to serve marginalised communities with Project Hope, a nonprofit that provides medical relief services. A few factors seem to account for the vast differences from one place to the next, he said: people and places closest to the coast usually fared the worst, as did people with lower incomes.

“There’s an interesting combination of location, the sturdiness of the structure people lived in, and means,” said Fuller.

On Pine Island, where the state quickly erected a temporary bridge to replace one washed out by the storm, volunteers are handing out water, ice, food and supplies. The island’s Publix grocery store reopened with generator power faster than seemed possible, pleasing island resident Charlotte Smith, who didn’t evacuate.

“My home is OK. The lower level did flood somewhat. But I’m dry. They have the water back on running. Things are really getting pretty good.” Smith said.

Life is very different for Shanika Caldwell, 40, who took her nine children to a mass shelter located inside Hertz Arena, a minor league hockey coliseum, after another shelter located at a public high school shut down so classes could get ready to resume. The family was living in a motel before the storm but had to flee after the roof flew off, she said.

“If they say they are going to start school next week, how am I going to get my kids back and forth from school all the way here?” she said.

As three shrimpers watched a Sunday afternoon NFL football game on a television set in the shade of a trawler that was pushed ashore by Ian, Alexa Alvarez wiped away tears as she stood in the rubble of Fort Myers Beach. She has fond memories of childhood trips with her brother and parents, who lived on the island and lost their home to the storm.

“I had to see it for myself, and just kind of say goodbye,” she said.

Ian, a strong Category 4 storm with 155 mph (249 kph) winds, was blamed for more than 100 deaths, the overwhelming majority of them in southwest Florida. It was the third-deadliest storm to hit the US mainland this century behind Hurricane Katrina, which left about 1,400 people dead, and Hurricane Sandy, which had a total death count of 233 despite weakening to a tropical storm just before it made landfall.

For some, the recovery has been fairly quick. Barber shops, car washes, chain restaurants, a gun range and vape shops — lots of vape shops — already have reopened on US 41, known in southern Florida as the Tamiami Trail. Many traffic lights are operating, yet residents of low-lying homes and mobile home parks just off the highway are still shoveling mud that was left behind by floodwaters.