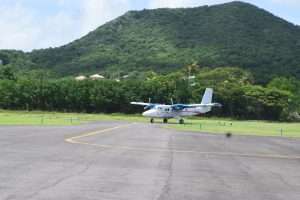 PR – Passengers travelling between Carriacou and Grenada will no longer be made to pay the airport user fee of EC$10. This follows a Government of Grenada decision to waive the fee.

This is welcomed news for Lauriston Airport-to- Grenada passengers who, for years, have been paying the fee. However, it was not paid by travellers from Grenada to Carriacou.

Minister for Carriacou and Petite Martinique Affairs and Local Government, Hon. Tevin Andrews, through his Ministry, made the request for the waiver via a cabinet submission. It was approved by the cabinet, with support from the Ministry of Tourism and Civil Aviation.

Minister Andrews said this now puts domestic passengers travelling between the islands on an equal footing and views this as a major achievement for his government.

The Lauriston user fee was first imposed in January 1994, upon the completion of rehabilitation work on the airport, the only airport on the 13-square-mile island of Carriacou.

The waiver of the airport user fee is being done with immediate effect. Meanwhile, plans are in progress to upgrade the Lauriston Airport to facilitate night landing.