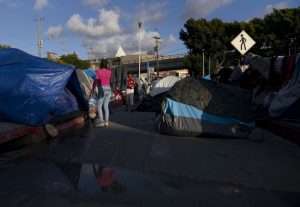 (CMC) – The New York Immigration Coalition (NYIC) has denounced a plan by New York City to open Humanitarian Emergency Response and Relief Centres to support hundreds of asylum seekers, including Caribbean nationals, primarily Haitians, who are arriving in the city daily from Texas and other border states.

New York City Mayor Eric Adams announced on Monday night that his administration will set up the city’s first Humanitarian Emergency Response and Relief Centre for asylum seekers on Randalls Island in Manhattan and would accommodate at least 500 asylum seekers.

But NYIC, an umbrella policy and advocacy organisation representing over 200 immigrant and refugee rights groups throughout New York, rejected the plan as “poorly-conceived..

“Despite the availability of underutilised buildings that are more accessible to mass transit and the social service needs of asylum seekers, the city continues to remain stubbornly committed to the development of relief camps across the five boroughs.

“Health, housing and immigrant rights organisations have repeatedly asked the city to be included in the planning to ensure that the needs of these vulnerable communities are integrated into the mayor’s proposal, but keep getting rebuffed,” he said.

Awawdeh said without a real permanent solution to the shelter crisis, these encampments will become a stain on New York’s reputation as a welcoming city, and do nothing more than cause more harm to asylum seekers who have already been treated like pawns in a political game.

But Adams noted that “New York City has, on its own, safely and efficiently provided shelter, health care, education, and a host of other services to more than 16,000 asylum seekers pursuing a better life over the last few months.

“As we now work to open the city’s first Humanitarian Emergency Response and Relief Center, safety for those seeking asylum remains our top priority. Following this weekend’s storms, New York City Emergency Management determined that, while we would be able to put in place the necessary mitigation measures, relocating the Orchard Beach humanitarian relief centre to Randall’s Island is the most efficient and effective path forward, and work is underway to make this move.”

New York City Public Advocate, Jumaane Williams, the son of Grenadian immigrants, said while Orchard Beach was a “particularly poor location for a tent shelter given its history of flooding and other factors, a tent shelter anywhere in this city cannot be used to circumvent the right-to-shelter mandate.

“We’re grateful the administration terminated the Orchard Beach location after cautions and pressure from advocates and local leaders, including our office. At the same time, we can’t see another tent city pop up without basic humanitarian conditions being met, and I hope the administration is more quickly receptive to our concerns moving forward,” he told CMC.

“Asylum seekers seeking support, solidarity and a better life deserve much more than a tent in a transit desert as winter approaches. At the very least, the city should tap into the same resources we used during the height of the pandemic to further open space at hotels or large indoor areas, as well as expedite CityFHEPS vouchers to quickly move unhoused New Yorkers out of shelters and into permanent housing, opening shelter space for asylum seekers,” he added.

The mayor said humanitarian relief centres will become the first touch point for arriving asylum seekers, helping people by immediately offering shelter, food, medical care, case work services, and a range of settlement options, including through connections to family and friends inside and outside of New York City.