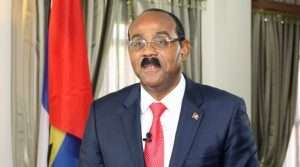 (CMC) – Antigua and Barbuda Prime Minister Gaston Browne says he is not satisfied with the response from his Trinidad and Tobago counterpart regarding the non-payment of millions of US dollars linked to the collapse of Trinidad-based insurance companies CLICO and British American Insurance Company (BAICO) in 2009.

Browne, who is chairman of the Eastern Caribbean Currency Union (ECCU) sub-committee on insurance, had said last month that a decision had been taken to take the Dr Keith Rowley administration before the Port-of-Spain-based Caribbean Court of Justice (CCJ).

The ECCU groups the islands of Anguilla, Antigua and Barbuda, Dominica, Grenada, Montserrat, St Kitts-Nevis, St Lucia and St Vincent and the Grenadines and Prime Minister Browne said he had written to Prime Minister Rowley after an ECCU meeting had agreed unanimously to take the Trinidad and Tobago government to court after three failed attempts to get them to pay the outstanding funds.

Speaking on his radio programme over the last weekend, Browne told listeners “his (Rowley’s)response is one that I think he has co-mingled a number of issues, even some gratuitous payments that were made by the late (prime minister) Patrick Manning he has tried to include in a possible settlement.

“So I am about to respond to him to let him know that he is mistaken and that the issues he has raised in his letter they certainly have no bearing to the case that we are pursuing,” Browne said, without disclosing the full content of Rowley’s letter.

The ECCU said that Trinidad and Tobago had made a commitment to pay US$100 million to the member countries but only US$40 million was disbursed following the collapse of C L Financial, the owners of CLICO and British American Insurance Company (BAICO).

In October last year, a group of British American and CLICO policyholders in the Eastern Caribbean filed a lawsuit at the CCJ against the Trinidad and Tobago government and Prime Minister Browne said that the ECCU decision to follow suit had been in the works for several years.

“Let me make it abundantly clear too that …the policy holders will come together collectively and they have a collective suit against the government of Trinidad and Tobago. That is separate from what we are pursuing here.

“The case I am pursuing is a settlement that was agreed to even before I became prime minister of a US$100 million. The Government of Trinidad and Tobago paid US$40 million of it, US$60 million is still outstanding.

“We are saying we would like to have it paid, we would like to negotiate a reasonable payment that doesn’t create any strain on the treasury of the government of Trinidad and Tobago. So if bonds are to be given then they will pay the interest over a period of time.

“We are saying here it’s a pledge that was given and it was given considering that Trinidad and Tobago benefitted from the CLICO/BAICO estate. We have said to them that the treaty of Chaguaramas (which governs the regional integration movement) is such that you cannot accord specialised treatment to your policyholders and other stakeholders and out others who are part of this very integration movement at a disadvantage”.

Browne said it is on that basis the ECCU believe that it has a case if Port-of-Spain refuses to settle.

He said this issue had first been communicated to Port-of-Spain by St Vincent and the Grenadines Prime Minister Dr Ralph Gonsalves and since taking over the chairmanship of the sub-committee on insurance in the ECCU last year, “as I have said to the distinguished Prime Minister of Trinidad and Tobago, this is not something that I want to pursue at the level of the court.

“But if we feel that we are not getting any justice then we will have no choice because we also have to protect our policyholders, our stakeholders just as how they have protected theirs,” Browne said.