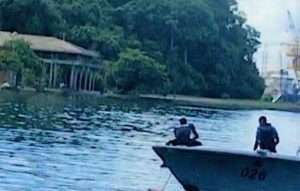 (TRINIDAD EXPRESS) – A mutilated body was found in the waters off Williams Bay, Chaguaramas on Sunday morning.

Police said that around 8.30 a group of people training for an upcoming Dragon Boat race had discovered what appeared to be human remains floating in the water.

They immediately alerted the Coast Guard who dispatched a vessel to the scene.

Police said that the sailors, “spent some time,” plucking the parts of the water.

An identity had not been confirmed up to last night.

On September 22 a similar discovery was made along the Southern Main Road, Curepe.

Police were told that days before the discovery residents in the area detected a smell emanating from an empty lot of land off the Southern Main Road, in the vicinity of Phillip Street.

Residents told police that they thought it was a dog.

On the morning of September 22 checks were made and someone discovered the dismembered body of a human being.

The body appeared to have been dead for some time and as a result the police could not determine the ethnicity nor the gender of the deceased.