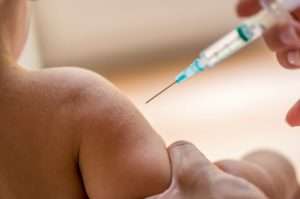 (AP) — A number of scientists have wondered if aluminum, a vaccine additive that has been used for decades, had a role in allergies and asthma in children.

A new federally funded study has found a possible link, but experts say the research has important shortcomings and is not a reason to change current vaccine recommendations. The study doesn’t claim aluminum causes the breathing condition, and officials say more work is needed to try to confirm any connection, which hadn’t been seen in earlier research.

Even if a link were ever found, the life-saving benefits of the vaccines are still likely to outweigh the asthma risk, said Dr Matthew Daley, the study’s lead author. But it’s possible that if the results are confirmed, it could prompt new work to redesign vaccines, he added.

Dr Paul Offit, of Children’s Hospital of Philadelphia, worried that the flawed study will needlessly scare some families away from proven vaccines.

He and other outside experts noted that Daley and his colleagues were unable to account for the effects of some potentially important ways children are exposed to aluminum — such as in the air or through their diet.

They also noted the findings include hard-to-explain inconsistencies, like why, in one subset of thousands of fully vaccinated kids, more aluminum exposure didn’t seem to result in a higher asthma risk.

CDC officials, in a statement, said it appears that aluminum-containing vaccines “do not account for the overall trends that we see.”

The study, released Tuesday, suggests that young children who were vaccinated with most or all of the recommended aluminum-containing vaccines had at least a 36 per cent higher risk of being diagnosed with persistent asthma than kids who got fewer vaccines.

Aluminum has been used in some vaccines since the 1930s, as an ingredient — called an adjuvant — that provokes stronger immune protection.

By age 2, children should be vaccinated against 15 diseases, according to US recommendations. Aluminum adjuvants are in vaccines for seven of them.

Aluminum adjuvants have long been considered safe and effective. Still, scientists noted a period of increased rates in allergies and asthma among US children during a 30-year period starting in about 1980, and some wondered if there was a connection. (Those rates levelled off starting about a decade ago and have declined somewhat in recent years, for reasons not fully understood.)

Several previous studies didn’t find a link between aluminum-containing childhood vaccines and allergies and asthma. But other research has linked aluminum in industrial workplaces to asthma. And mice injected with aluminum suffer an immune system reaction that causes the kind of airway inflammation seen in childhood asthma.