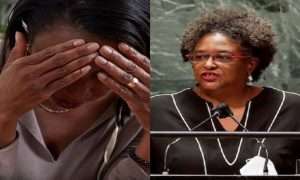 (JAMAICA OBSERVER) – A Jamaican woman, who has accused Barbadian law enforcement officials of sexually violating her while she was in their custody, is calling on Barbadian Prime Minister Mia Mottley for help in bringing closure to her plight.

In February 2010, the woman had embarked on a flight, loaded with ganja in her luggage, from Kingston, Jamaica to Bridgetown, Barbados. After the flight landed at the Grantley Adams International Airport, the contraband was discovered and the woman was collared and detained.

The woman claims she was raped by two policemen, one of whom forced her to perform oral sexual acts on him. Both men, she said, were facilitated by the actions of a female police officer.

She pleaded guilty to the drug charges and served an 18-month sentence. However, more than a decade later, she’s still crying for justice.

“I need your help Miss Mottley. As a woman you may understand. I did my time for my crime, but yet still those people who violated me have not been brought to account. This only happened to me because I am a woman. I was wrong and paid my price. Shouldn’t those who committed a crime against me be held to account? I need your help, Miss Mottley,” the woman said in an interview with OBSERVER ONLINE.

The Barbadian judicial system is aware that the woman contends that despite being under suspicion of committing a crime, she was viciously violated. The woman has filed a civil case against the Barbadian Government while a criminal case is still active against the law enforcement officers.

THOMAS… says her client needs closure.
The case rests on the desk of Deputy Solicitor General, Donna Braithwaite. The complainant filed two complaints against the Barbadian government 11 years ago.

Calls to Braithwaite’s office and to that of the Barbados Office of the Director of Public Prosecutions, yielded no reply.

The case was scheduled to appear before the courts in 2020 but the COVID-19 virus unavoidably added another two year wait for the complainant as the country’s court system ground to a halt.

“Miss Mottley. Can you please look into this situation for me? I was made to suffer indescribable horrors. I was helpless. I was in no position to defend myself and they used that against me. I am still suffering from trauma,” the woman said.

Jamaican-born attorney Jaydene Thomas represents the interests of the accusing woman. Thomas said her client was at her wits end and needs closure.

“It is amazing why justice can’t be administered in this case. Twelve years is too long under any legal circumstance surrounding cases such as these. The accuser and the accused need their cases to be heard. We are committed to seeking justice on behalf of this woman. Justice delayed is justice denied,” Thomas said.

The woman claims to have been abused months before the landmark case of Jamaican Shanique Myrie came to light. Myrie complained that she was subjected to a dehumanising cavity search from a female customs officer in Barbados and then locked in a clammy room before being deported back to Jamaica.

Myrie brought her case to the Caribbean Court of Justice after claiming the actions of the Barbadian officials breached the clauses of the Revised Treaty of Chaguaramas which allowed for free travel and trade between Caricom States.

Myrie was awarded US$4,000 after a panel of three judges found the Barbadian state culpable.

“It is not even about money. What they did to me was wrong and all I ask for is the chance to face my abusers and state my case,” the woman told OBSERVER ONLINE.