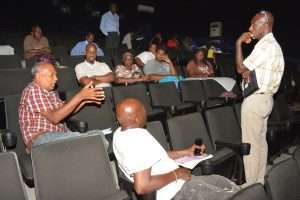 PR – The Ministries of Agriculture and Finance facilitated a  budget consultative session on Wednesday, September 21, 2022, to garner pertinent recommendations  for inclusion in the 2023 national budget.

The session, which targeted agriculture and fisheries stakeholders, was held at the Deluxe Cinema,  Grenville, St. Andrew, and was attended by the Substantive Minister for Agriculture, Hon. Lennox  Andrews, who is also Grenada’s Minister for Economic Development.

Participants were divided into four groups to get the best of every subsector. Farmers, beekeepers, and  floriculturists formed one group, poultry livestock and butchers formed the second group, fisherfolks,  long liners, and sea moss producers were placed in the third group, and agro-processors comprised the  fourth.

The objective was to gather transformative ideas that can be incorporated into the budget to address  pressing issues affecting different sectors.

He said, “While you think about the needs and constraints affecting growth and development in the  agriculture sector, we also want you to think of areas in which government can make money. It is  important to have the money to put back into the economy.”

Agriculture and Fisheries Representative in the Senate, Roderick St. Clair spoke to the importance of the  consultation, not only to agriculture and fisheries but the nation as a whole. He said with food security  being a priority, the ideas garnered from the session well help in finding ways to combat high food  prices.

Recommendations for the 2023 budget included compensation for victims of praedial larceny, training  in critical farming techniques, a designated desk or office for agro processors, quality assurance for the  fishing sector, and measures to increase consumption of local livestock products.

Permanent Secretary in the Ministry of Agriculture, Aaron Francois, said while not every suggestion may  be taken on board, government is committed to making a difference in the agricultural and fisheries  sector through collaboration.

He said, “A lot of the issues are not new; from government’s side, we have our role to play in helping  with the enabling environment and the support in building the productive sector, but you too as  entrepreneurs, as custodians of the resources, you have your responsibility also. So, let’s work  together.”