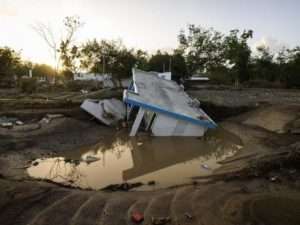 Government officials have been working with religious groups, nonprofits and others braving landslides, thick mud and broken asphalt by foot to provide food, water and medicine for people in need, but they are under pressure to clear a path so vehicles can enter isolated areas soon.

Nino Correa, the commissioner for Puerto Rico’s emergency management agency, estimated that at least six municipalities across the island had areas that were cut off by Fiona, which struck as a Category 1 hurricane and was up to Category 4 power Thursday as it headed toward Bermuda.

Manuel Veguilla said he has been unable to leave his neighbourhood in the north mountain town of Caguas since Fiona swept in on Sunday.

“We are all isolated,” he said, adding that he worries about elderly neighbours, including his older brother who does not have the strength for the long walk it takes to reach the closest community.

Veguilla heard that municipal officials might open a pathway Thursday, but he doubted that would happen because +large rocks covered a nearby bridge and the 10-foot space beneath it.

Fiona sparked an islandwide blackout when it hit Puerto Rico’s southwest region, which already was still trying to recover from a series of strong earthquakes in recent years.

Some 62% of 1.47 million customers remained without power Thursday, four days after the storm, amid an extreme heat alert issued by the National Weather Service. Some 36% of customers, or nearly half a million, did not have water service.