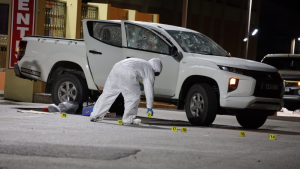 Jeffrey Peters, a security officer of Allied Security Services, died instantly after being shot around 5 pm, shortly after he drove out of the Pennywise compound, loaded with cash.

Another colleague, who was sitting in the back seat, was also hit, while a third guard Pennelope Baptiste was shot in the head. She remains warded in critical condition at the San Fernando General Hospital.

Investigators said the guards went to Pennywise Plaza, at South Trunk Road, to pick up a large sum of cash. They were sitting in a white pick-up van when the robbers opened fire from an AR-15 (Armalite Rifle).

The bullets entered the windows shooting Jeffrey in the driver’s seat. Baptiste and the other guard opened fire, hitting one of the robbers. Another robber dropped his AR-15 weapon as he attempted to flee.

The guard at the back of the pick-up slumped downwards, bleeding while horrified shoppers and store clerks looked on.

The road was littered with spent shells fired by an AR-15.

Insp Ali, of Allied Security Services, arrived a short while later and went past the caution tape.

But the police stopped him and spoke to him in another area. Visibly distraught and almost on the brink of tears, Ali stood watching the van where Peter’s body lay.

The injured officers were taken by ambulance to the San Fernando General Hospital. Their friends and colleagues prayed at the scene for them to recover.

But by 7 pm, news came that the back seat security officer had succumbed to gunshot wounds. Baptiste was said to be critical.

Meanwhile, police pursued the robbers for two hours, setting up a dragnet and intercepting vehicles.

A Nissan Sylphy, believed to be used in the robbery, was found abandoned near the T&T Regiment army base in La Romain.

A source told police the robbers then hijacked a white X-trail and went to La Romain to hide.

They took a shortcut through Junes Development to get to Pond Street where they attempted to elude capture.

But officers, led by Senior Supt Richard Smith, cornered the robbers under a house at Pond Street. A shootout occurred and all four suspects were shot dead.

Their identities have not yet been confirmed.

A director at Allied Security Services extended condolences to the families of the dead security guards.

“Our hearts and condolences go out to our loved ones. This is the reality. Crime is on the rise, we all have to be extra vigilant,” he said.

Speaking about Jeffrey and his team, the director said: “These guys are awesome individuals, but the loss of life is a hard thing to swallow. We want to extend our condolences to the families.”

Pennywise also issued a comment last night saying the La Romain Plaza will remain closed as a sign of respect so that staff can get some time to focus on their mental health. “Today, armed bandits attacked three security officers that were driving out of our La Romain compound. The board of directors, management and staff would like to extend our sincerest condolences to the families of the victims,” the statement read.

Anyone with information on the shooting can call Crime Stoppers at 800-TIPS.

Acting Police Commissioner McDonald Jacob confirmed that the four robbery suspects were killed. He said the robbers had been tracked using the police grid system.

“Through the grid system they (police) followed the vehicle which was abandoned. They then robbed someone else of their vehicle and entered a house in La Romaine where four of the assailants were killed by the police,” Jacob said.

He revealed that three A-15s and one pistol were recovered from the scene of the crime.

“ The matter is an active investigation that is going on in the South,” he added.