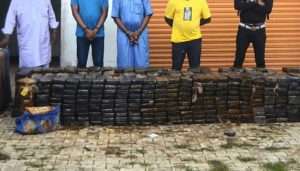 (AP) — Nigeria’s anti-drug agency seized a record 1.8 tons of cocaine valued at $278 million at a Lagos warehouse in what it described Monday as likely the country’s largest bust ever.

Five people – the warehouse manager and four “drug barons” including one profiled as a Jamaican – were arrested in connection with the drugs, the National Drug Law Enforcement Agency said. It said the suspects were members of an international drug syndicate the agency has been trailing since 2018.

The agency said the drugs were found in a secluded estate in the Ikorodu area of Lagos on Sunday at a time when “the cartel was trying to sell them to buyers in Europe, Asia and other parts of the world.”

The drugs were stored in 10 travel bags and 13 drums, the agency said in a statement published along with photos of the suspects and the drugs.

The agency said the arrests and seizure were “a historical blow to the drug cartels and a strong warning that they’ll all go down if they fail to realize that the game has changed.”

Drug seizures have been rising in West Africa in the last year, indicating that traffickers have made the continent a hub to move their illegal products between South America and Europe.