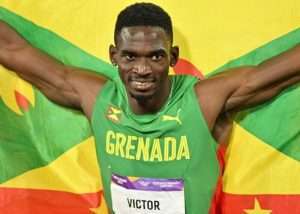 PR – Minister of State in the Ministry of Education, Youth,  Sports & Culture, Hon. Ron Redhead has congratulated Lindon Victor on his dominance in the men’s decathlon at the Decastar, in Talence, France.

Victor, who is also the Commonwealth champion, broke his Grenadian record, scoring  8550 points to win the decathlon at the Decastar meeting in Talence on Sunday, winning the overall men’s title in the World Athletics Combined Events Tour.

Hailing the decathlete’s victory, Minister Ron Redhead said Grenada is “elated by  Lindon’s wonderful performance”, and added that every Grenadian will continue to feel  proud of him.

Victor contested his fourth decathlon of the year, having finished second in Götzis and  fifth at the World Championships before his triumph at the Commonwealth Games. Still,  he showed little fatigue in Talence at this late season stage.

In the shot put, Victor launched ahead thanks to a 15.75m throw, almost a meter farther  than any of his rivals.

Victor’s strong series continued Sunday, starting with a 14.70 run in the 110m hurdles,  just a few hundredths shy of his season’s best.

But Victor responded in the next event, throwing 51.00m –day’s best mark – in the discus  to regain the lead.

He equalled his 4.80m season’s best in the pole vault and followed it with a 66.01m throw  in the javelin, another intense event for the Grenadian, giving him a lead of almost 400  points going into the final event.