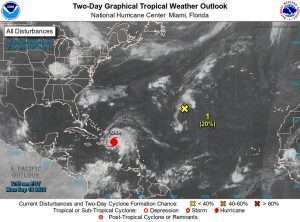 (SOUTH FLORIDA SUN-SENTINEL) – A strengthening Hurricane Fiona was over the Dominican Republic early Monday as its outer bands continued to deluge Puerto Rico, where rain could total up to 30 inches.

Fiona, the third Atlantic hurricane of the season, is forecast to become a major Category 3 hurricane by midweek with maximum sustained winds of 125 mph. At that point, the storm’s center is expected to be well to the east of the Bahamas.

The center of Fiona is forecast bring up to 15 inches of rain and 3 to 5 feet of storm surge to the Dominican Republic Monday, then move near the Turks and Caicos Tuesday, where storm surge could raise water levels by as much as 2 to 4 feet above normal tide levels Monday night into Tuesday, experts said. Fiona is expected to pivot north-northwest on Tuesday and north on Wednesday.

At 8 a.m. Monday, the Category 1 hurricane was 35 miles southeast of Samana, Dominican Republic, and was producing top winds of 90 mph. Strengthening is forecast during the next few days, according to the National Hurricane Center. Its hurricane-force winds extended outward up to 30 miles from its center and tropical-storm-force winds extended outward up to 140 miles.

Fiona’s path is expected to “miss significant encounters” with mountainous terrain in the Dominican, according to AccuWeather, which will allow the storm to continue to gain in intensity.

“It’s important people understand that this is not over,” said Ernesto Morales, a meteorologist with the National Weather Service in San Juan. He said flooding reached “historic levels,” with authorities evacuating or rescuing hundreds of people across the island.

Puerto Rico was still under a tropical storm watch early Monday, where heavy rains are expected to continue.

“The damages that we are seeing are catastrophic,” said Gov. Pedro Pierluisi.

The storm also tore the roofs off homes, including that of Nelson Cirino in the northern coastal town of Loiza.

“I was sleeping and saw when the corrugated metal flew off,” he said as he watched rain drench his belongings and wind whip his colorful curtains into the air.

There were concerns about Puerto Rico’s weak power grid ahead of the storm. The lights went out briefly as Puerto Rican officials held a briefing on the storm earlier in the weekend.

“I think all of us Puerto Ricans who lived through Maria have that post-traumatic stress of, ‘What is going to happen, how long is it going to last and what needs might we face?’” said Danny Hernández, who works in the capital of San Juan but planned to weather the storm with his parents and family in the western town of Mayaguez.

Forecasters also are tracking one other disturbance in the central Atlantic. It has only a short window to develop this week before conditions become less favorable, the National Hurricane Center said Monday.

The next storm to form would be Gaston.

The 2020 hurricane season set a record with 30 named systems, while 2021′s season was the third-most active with 21 named systems. An average year calls for 14 named storms.