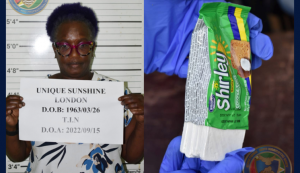 (GUYANA NEWS ROOM) – The Customs Anti-Narcotics Unit (CANU) on Wednesday busted a female outgoing passenger at the Cheddi Jagan International Airport with a large quantity of suspected cocaine concealed in biscuit wrappers in her carry-on luggage.

Unique Sunshine London, 59 years old, of Haslington, East Coast Demerara, was busted with an estimated $12.3 million or US$336,000 worth of cocaine.

She was destined for the United States of America (USA).

London was arrested and escorted to CANU’s Headquarters along with the suspected narcotics which tested positive for cocaine and amounted to 11.188kgs, a press release from CANU on Friday said.

Dhanraj Deochand, of Perseverance, Essequibo was arrested after it was discovered that he checked in a luggage for Unique Sunshine.

Investigations are in progress.

CANU, in their press release, reminded that the trafficking of narcotics is illegal and that persons should examine packages when asked by others to transport them.