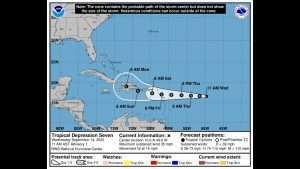 (ABC NEWS) – A tropical depression formed in the Atlantic Ocean on Wednesday morning and forecasters at the U.S. National Hurricane Center said it could strengthen to a tropical storm.

“Interests in the Leeward Islands, the Virgin Islands, and Puerto Rico should monitor the progress of this system,” the agency said.

“On the forecast track, the center of the system is forecast to move through the Leeward Islands on Friday or Friday night and be near the Virgin Islands and Puerto Rico this weekend,” the hurricane center advisory said.