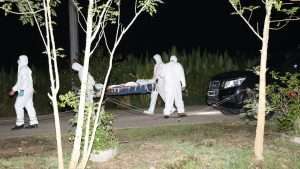 (TT GUARDIAN) – Less than two months after her husband Amit Boodoo was murdered, a 30-year-old woman was gunned down near her Penal home on Tuesday.

Kristin Paul, of Ramdhanie Trace, off Mohess Road, was shot several times and died at the scene during the attack.

Police said around 4 pm, she and her husband’s brother were in separate vehicles proceeding along Mohess Road.

Paul also stopped and came out of the vehicle she was in and entered the Frontier.

While Paul was sitting in the van with the windows up, a white Toyota Corolla Axio pulled up and an occupant came out and opened fire.

Boodoo’s brother, who owns a poultry business, and residents who heard the gunshots scampered for safety. After the Axio sped off, Paul was found bleeding in the van.

Residents, who said Paul recently moved into the area, noted that the shooting has left the community traumatised.

Investigators were last evening trying to ascertain a motive.

However, Paul witnessed the murder of her husband Amit Boodoo in front their Jaipaulsingh Trace, Barrackpore home on July 22.

Boodoo, who was also armed with a cutlass, was chopped to death during an altercation with a man he knew. The other man was also injured. Fisherman Michael Francis, of St Croix, Princes Town, has since been charged with his murder.

Officers of the Homicide Bureau of Investigations Region 3 are investigating.