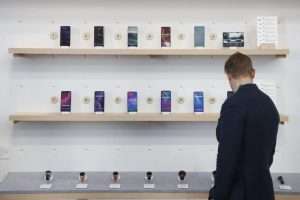 (AP) — A top court largely rejected Google’s appeal of a record European Union (EU) antitrust fine imposed for throttling competition and reducing consumer choice through the dominance of its mobile Android operating system. It marks another win for EU regulators taking a global lead in controlling the power of big tech companies.

The European Court of Justice’s General Court mostly confirmed a 2018 decision by the EU’s executive Commission to slap Google with a fine of more than 4 billion euros ($3.99 billion).

“In order better to reflect the gravity and duration of the infringement,” it’s appropriate to give Google a fine of 4.125 billion euros, the court said. That’s slightly lower than the original 4.34 billion euro penalty, with the court saying its reasoning differed “in certain respects” from the commission’s.

“We are disappointed that the Court did not annul the decision in full,” Google said in a statement. “Android has created more choice for everyone, not less, and supports thousands of successful businesses in Europe and around the world.”

The company has previously argued that free and open-source Android has resulted in low-cost phones and driven competition with its chief rival, Apple. Android is the most popular mobile operating system, beating even Apple’s iOS.

The fine is one of three antitrust penalties totaling more than $8 billion that the European Commission slapped on Google between 2017 and 2019, putting the 27-nation bloc at the forefront of the global push to rein in tech giants.

Since then, the commission has widened its crackdown on digital giants with more antitrust investigations targeting Amazon, Apple and Facebook and sweeping new rules aimed at clamping down on the biggest digital companies. Tech companies are now facing tighter scrutiny around the world: Google also got hit with a $50 million fine Wednesday by South Korean privacy watchdogs that also fined Facebook parent Meta $22 million.

It determined that Google broke EU rules by requiring smartphone makers to take a bundle of Google apps if they wanted any at all and prevented them from selling devices with altered versions of Android.

The bundle contained 11 apps, including YouTube, Maps and Gmail, but regulators focused on the three that had the biggest market share: Google Search, Chrome and the company’s Play Store for apps.

Google had made some changes after the original ruling to address the issues, such as giving European Android users a choice of browser and search app and charging device-makers to pre-install its apps.

EU consumer group BEUC, which argued for the commission’s case in court hearings, said the decision “confirms that Europe’s consumers must enjoy meaningful choice between search engines and browsers on their phones and tablets.”

Google still has one more chance to appeal the decision — but only on points of law — to the EU Court of Justice, the bloc’s highest court. It didn’t say whether it would do so.

The company has already lost an appeal of its first EU antitrust penalty, which it’s now appealing to the Court of Justice. The General Court last year also sided with the commission, upholding a 2.4 billion-euro fine issued in 2017 by regulators who decided that Google unfairly targeted visitors to its comparison shopping service, Google Shopping, to the detriment of rivals.