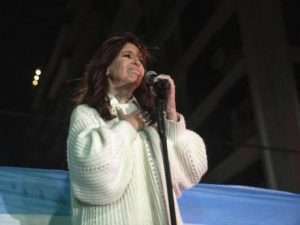 (AP) — A third person has been arrested as part of the investigation into the assassination attempt on Argentine Vice President Cristina Fernández — a move that suggests the incident could have involved a network of people.

Agustina Díaz, who appears to have at least been a close friend of the girlfriend of the man accused of trying to shoot Fernández on September 1, was detained Monday in the province of Buenos Aires, an official with knowledge of the case confirmed to The Associated Press.

They spoke on condition of anonymity because they were not authorised to speak on the investigation.

Fernando Sabag Montiel, a 35-year-old Brazilian citizen, was detained shortly after he pointed a handgun at Argentina’s vice president outside her home.

He pulled the trigger twice, but the Bersa handgun failed to go off, though it was loaded with five bullets.

His girlfriend, Brenda Uliarte, a 23-year-old Argentine who reportedly was at the scene of the attempted shooting, was arrested three days later.

Uliarte and Sabag Montiel are both accused of trying to assassinate Fernández, the most important political figure in Argentina in the last 15 years.

She was president for two terms from 2007 to 2015 and now has both ardent followers and detractors.