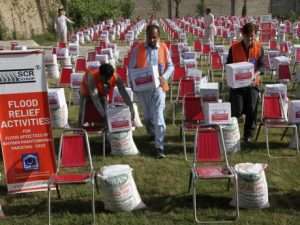 (AP) — Pakistan scrambled to deliver aid to those most in need on Tuesday as the death toll from record-breaking floods in this impoverished Islamic nation rose further, with no respite in sight from the unprecedented monsoon rains.

The rains started early this year — in mid-June — and swept away entire villages, bridges and roads, leaving hundreds of thousands homeless.

At one point, a third of the country’s territory was inundated with water.

Experts have said that climate change has been blamed in large part for the deluge, the worst in recent memory.

Sherry Rehman, Pakistan’s minister for climate change, warned that the rains, which had abated late last month only to restart this week, are predicted to continue lashing much of the country in the coming weeks.

It will take up to six months to drain water in flood-hit areas, officials say.

Waterborne diseases have already sickened thousands of people in flood-stricken areas — and now there are fears of mosquito-borne dengue fever. Mosquitos have spread, due to stagnant waters following the flooding.