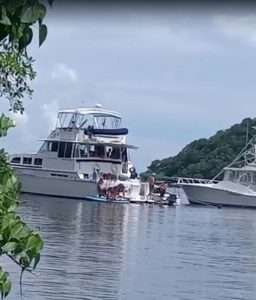 Up to press time, the names of the victims had not yet been released by police. However, one of the victims is believed to be a student at a secondary school in Port-of-Spain.

Guardian Media understands that the two boys were attempting to swim from a chartered boat anchored Down the Islands to a nearby beach.

It was while on their way to shore that the 17-year-old noticed that his friend went under.

It is believed that the boy attempted to look for his friend when he too got into difficulties.

According to an eyewitness account that was shared in a social media chat, the two were swimming from a charter boat in Turtle Bay to the beach.

“When the friend got to the beach he turned around looking for his friend. I was not aware all this was going on until minutes before they found him underwater and pulled him into a dingy. From my view… a Spanish boy was pumping his chest … for quite some time, then boat drifted toward…and they put him in the back of … boat. Many people were pumping his chest and blowing into his mouth. I was above looking on. Even…took over till the Coast Guard took him… heard about 20 minutes after that he was in fact dead. So sad. It was so tragic. Can’t believe that happens. Never witnessed anything like that. Sigh.”