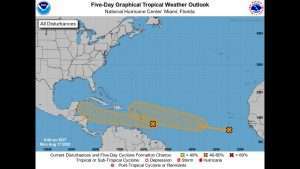 The tropical wave farthest off the coast is generally headed west-northwest across the Atlantic and is expected to reach the Windward Islands, near the southeastern Caribbean Sea, by week’s end, forecasters said.

Conditions are only “marginally” conducive for development of the other wave, located closer to coast of west Africa Monday, according to the National Hurricane Center.

Experts have given both waves a 20% chance of developing over the next five days.

What had been Hurricane Earl dissipated early Sunday.

Earl was the first Category 2 hurricane of the 2022 Atlantic season.

The last time a major hurricane hadn’t formed by Sept. 11 was in 2014, when Edouard became a Category 3 on Sept. 16. That season followed a 2013 where there were no major storms recorded.

Earl and Hurricane Danielle, which formed last week and has since dissipated, were the first named storms to form in the Atlantic since early July, when Tropical Storm Colin formed offshore of the Carolinas.

It was a quiet August with no named storms, something that happened for only the third time since 1961.

The 2020 hurricane season set a record with 30 named systems, while 2021′s season was the third most active with 21 named systems. An average year calls for 14 named storms.

The next named storm to form will be Fiona.

Forecasters say dry air, Saharan dust and wind shear have been among the reasons there haven’t been more storms this year.