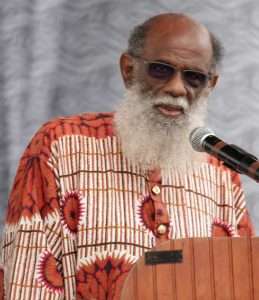 (CMC) – A senior official of the Emancipation Support Committee of Trinidad and Tobago on Friday said he had no tears to shed over the death of Queen Elizabeth II, saying she was a symbol of oppression and tyranny.

“The Queen is a major symbol, especially for the British part of the colonisers. So to me, what the Queen was, is the symbol of the oppression that we have gone through as supposedly subjects of the British which ended officially when independence was declared in 1962,” said Khafra Kambon, who is the director of Regional & Pan-African Affairs at the Emancipation Support Committee.

The 96-year-old Queen died Thursday at Balmoral, her castle in Scotland, and since then regional leaders have joined the international community in mourning the loss of the longest serving monarch in Europe in recent times.

Her son, Charles, has already been named as the new monarch.

In Trinidad and Tobago, flags hoisted at state and non-state agencies, as well as the country’s diplomatic missions, are to be flown at half-mast on Friday and on the day of Queen Elizabeth II’s funeral as a sign of respect.

“Members of the public are reminded that the national flag should be flown at half-mast or half-staff by lowering the flag by its own depth, from its normal position at the peak of the staff, when the nation is in mourning,” the Ministry of National Security said.

“Flags of foreign nations should not be flown at half-mast, unless their country is also observing the period of mourning,” it added.

Kambon, a trained economist and a well-known national figure in Trinidad and Tobago since 1970 when he was one of the leaders of the Black Power movement, told radio listeners that despite independence “the British like other Europeans have continued to have the power to project themselves as being important to everybody.

“And the Queen because of the way…from the day of colonialism, the way that Royal family, the way they injected them into our psyche, made us see them as such special people when in fact the history is one of tyranny”.

Kambon told the I955FM radio station that the symbol attached to Queen Elizabeth has now been passed on to the new King.