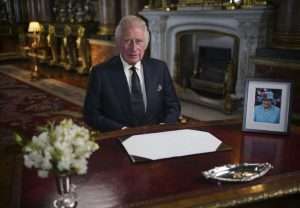 (AP) — King Charles III vowed in his first speech to the nation as monarch Friday to carry on Queen Elizabeth II’s “lifelong service,” as Britain entered a new age under a new sovereign. Around the world, the queen’s exceptional reign was commemorated, celebrated and debated.

Charles, who spent much of his 73 years preparing for the role of king, addressed a nation grieving the only British monarch most people alive today had ever known. He takes the throne in an era of uncertainty for both his country and the monarchy itself.

He spoke of his “profound sorrow” over the death of his mother, calling her an inspiration.

“That promise of lifelong service I renew to all today,” he said in the recorded, 9 1/2-minute address, delivered with a framed photo of the queen on a desk in front of him.

“As the queen herself did with such unswerving devotion, I, too, now solemnly pledge myself, throughout the remaining time God grants me, to uphold the constitutional principles at the heart of our nation,” he said.

The king’s speech was broadcast on television and streamed at St. Paul’s Cathedral, where some 2,000 people attended a service of remembrance for the queen. Mourners at the service included Prime Minister Liz Truss and members of her government.

As the country began a 10-day mourning period, people around the globe gathered at British embassies to pay homage to the queen, who died Thursday at Balmoral Castle in Scotland.

In London and at military sites across the United Kingdom, cannons fired 96 shots in an elaborate, 16-minute salute marking each year of the queen’s life.

In Britain and across its former colonies, the widespread admiration for Elizabeth herself was occasionally mixed with scorn for the institution and the imperial history she symbolized.

On the king’s first full day of duties, Charles left Balmoral and flew to London for a meeting with Truss, appointed by the queen just two days before her death.

He arrived at Buckingham Palace, the monarch’s London home, for the first time as sovereign, emerging from the official state Bentley limousine alongside Camilla, the queen consort, to shouts from the crowd of “Well done, Charlie!” and the singing of the national anthem, now called “God Save the King.” One woman gave him a kiss on the cheek.

Under intense scrutiny and pressure to show he can be both caring and regal, Charles walked slowly past flowers heaped at the palace gates for his mother. The mood was both grieving and celebratory.