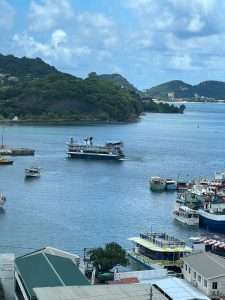 The ship came to Grenada for Carnival festivities in August 2022; however, the ship was arrested in Grenada when certain of its crew inflicted harm and grievous harm on Grenadian Olympic javelin gold medalist Anderson Peters and his brother Kiddon Peters, Carnival Tuesday night on board the said ship.

Those crew members who were charged have pleaded guilty at the St George’s Magistrate’s Court to summary criminal offences of causing  such harm and grievous harm.

The arrest of the ship was related to civil proceedings brought by the Peters brothers in the High Court of Grenada against the owners of the ship regarding the said harm and grievous harm. The arrest was effected through the Admiralty Division of the Court, on application by the Lawyers on record, Derick F Sylvester & Associates.

The departure of ‘Harbour Master’ was the fruit of intensive negotiations between Lawyers for the Peters brothers and Lawyers for the ship. The issue was the posting by the ship of proper security in the event of the ship being found liable in the High Court civil case.

On one side of the negotiations were Derick F. Sylvester and Alicia Lawrence, Lawyers on record for the Peters brothers, advised by Ruggles Ferguson and Dr. Francis Alexis Q.C. On the other side were Nyree D. Alfonso of Trinidad @ Tobago and Dylan Charles of Grenada.

Mr. Sylvester says that ‘constructive and focused professional legal talks between the two teams of Lawyers produced a mutually satisfactory conclusion to this stage of the matter’.

The High Court case will continue in the normal way.