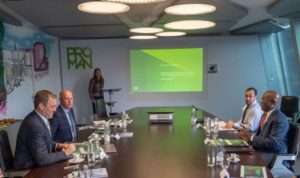 (CMC) – The Trinidad and Tobago government on Monday said the Swiss-based energy company, Proman, has reiterated a commitment to investment an estimated US$1.1 billion over the next 10 years for major plant maintenance turnarounds in the Caribbean country.

Proman describes itself as one of the world’s largest methanol producers, and a leading fertiliser producer globally, with operations and assets all over the world.

A statement issued by the Office of the Prime Minister, said that the assurance was given during talks held in Zurich between Prime Minister Dr Keith Rowley and Proman’s chief executive officer, David Cassidy, and his executive.

Rowley is being accompanied by his Energy and Energy Industries Minister, Stuart Young.

The statement said that Trinidad and Tobago is a key centre of Proman’s operations with 14 petrochemical plants owned and operated there and 1,100 employees accounting for 67 per cent of its global headcount.

During the meeting the energy company reiterated its commitment to Trinidad and Tobago, highlighting its planned investment of US$1.1 billion over the next 10 years for major plant maintenance turnarounds at Point Lisas.

“This investment will fund work on safety, reliability and greenhouse gas reduction initiatives. The company will also work with the government to pursue other energy transition initiatives and opportunities,” the statement said.

It said that the discussions also focused on Proman’s upstream company – DeNovo – its operations and opportunities for expansion of its acquisitions.

“The meeting featured talks on Proman’s promotion of methanol as a maritime fuel and the reduction of shipping emissions. The meeting explored opportunities for Trinidad and Tobago as one of the largest global methanol producers, which also boasts a safe harbour, to position itself as a major shipping refuelling destination.

“The role of carbon capture in the new economic model for energy transition also formed part of the discussions today,” the statement said, adding that two Trinidadians, who are also part of Proman’s executive leadership team, “gave detailed presentations on the ways in which Trinidad and Tobago fit into the company’s global thrust”.

Rowley and Young will visit Proman’s operations in Germany on Tuesday, the statement added.