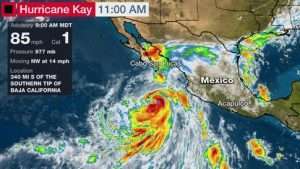 (REUTERS) – Tropical storm Kay strengthened into a hurricane off Mexico’s Pacific coast on Monday, weather authorities said, a day after leaving three people dead in the southwestern state of Guerrero.

The National Hurricane Center (NHC) in Miami reported Kay had strengthened into a hurricane, forecasting that outer rain bands will continue to affect southwestern Mexico for the next day or so.

Over the weekend Kay damaged houses, felled trees and overflowed rivers in the state of Guerrero and in the port of Acapulco, on the Pacific Coast.

“Three people have died since the beginning of this cyclonic condition, and the climatic phenomenon is moving away from the coasts of Guerrero,” said Roberto Arroyo, Guerrero’s secretary of civil protection.

Kay has reached sustained winds near 80 miles per hour (130 km per hour) with higher gusts, according to data from the NHC. Strong winds and rain will move to Mexico’s Baja California peninsula by early Wednesday, it added.