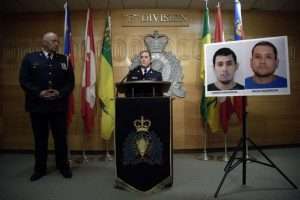 (AP) — One of the suspects in the stabbing deaths of 10 people in the Canadian province of Saskatchewan has been found dead, and his injuries are not self inflicted, police said Monday as they continued the search for a second suspect.

Regina Police Chief Evan Bray said Damien Sanderson, 31, has been found dead and that they believe his brother, Myles Sanderson, 30, is injured and on the run. While Damien’s body was found near the stabbing sites they believe Myles is in Regina, the capital of Saskatchewan.

“His body was located outdoors in a heavily grassed area in proximity to a house that was being examined. We can confirm he has visible injuries. These injuries are not believed to be self inflicted at this point,” said RCMP Commanding Officer Assistant Commissioner Rhonda Blackmore.

The discovery of the body came on the second day of a massive manhunt for the pair, who are suspected of carrying out a series of stabbings in an Indigenous community and a nearby town, which also left 18 people injured. It was the deadliest attacks in the nation’s history.

Authorities have said some of the victims were targeted and others appeared to have been chosen at random on the James Smith Cree Nation and in the town of Weldon in Saskatchewan. They have given no motive for the crimes— but a senior Indigenous leader suggested drugs were somehow involved.

While they believe Myles is in Regina, about 335 kilometers (210 miles) south of where the stabbings happened, authorities have issued alerts in Canada’s three vast prairie provinces — which also include Manitoba and Alberta — and contacted US border officials.

With one suspect still at large, fear gripped communities in the rural, working class area of Saskatchewan surrounded by farmland that were terrorized by the crimes.

As the Labour Day holiday weekend drew to a close Monday, police urged Saskatchewan residents who were returning from trips away to look for suspicious activity around their homes before entering.

Arrest warrants have been issued for the pair of suspects and both men had faced at least one count each of murder and attempted murder. More charges were expected.

The stabbing attack was among the deadliest mass killings in Canada, where such crimes are less common than in the United States. The deadliest gun rampage in Canadian history happened in 2020, when a man disguised as a police officer shot people in their homes and set fires across the province of Nova Scotia, killing 22 people. In 2019, a man used a van to kill 10 pedestrians in Toronto.