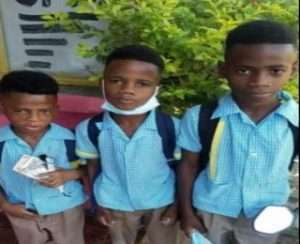 (CMC) – Three, children, including twins, who were expected to return to their classrooms on Monday, died in a fire that destroyed their home in Springfield, Westmoreland in the westernmost parish of Jamaica on Sunday night, the Police’s Corporate Communications Unit (CCU) has confirmed.

The children, ages, seven to nine years, attended the Sheffield Primary School in Westmoreland. Their 12-year-old sister, who also suffered serious burns, is being treated at the hospital.

Media reports said that the fire was triggered by candles that were lit by the children because of a power outage in the area.

The children were being cared for by their single father Adrian ‘Bonez’ Anthony Laing, who hours before their deaths, had posted pictures of their uniforms, bags, and shoes on social media.

“Thank u Jah am ready for the new school term with my kids…I have no time to waste…it’s not been easy as a single dad but I am holding on,” he wrote, adding that he had already ironed their clothes.

Laing had also posted on social media, a photo believed to be of the children’s mother, asking anyone knowing her whereabouts to contact the nearest police station.

In August 2021, he posted a message on his page stating that he cried night and day, and prayed she was okay after she went missing.

Police and fire officials are investigating the cause of the blaze.