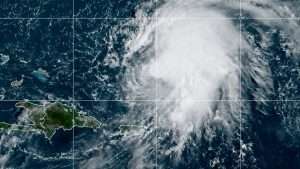 (CMC) –Tropical Storm Earl, which could become a hurricane later this week, is expected on Monday to dump up to eight inches of rain across the Leeward Islands, and the United States and British Virgin Islands, according to the latest weather bulletin issued by the Miami-based National Hurricane Center (NHC).

It said that the storm is moving north-northwestward with little change in strength and was located 175 miles north of St Thomas in the US Virgin Island and 790 miles north of Bermuda.

“A turn towards the north at a slightly faster forward speed is expected later today, with this motion continuing for the next couple of days,” the NHC said, adding that maximum sustained winds are near 50 miles per hour (MPH) with higher gusts.

“Slow strengthening is forecast over the next several days, and Earl could become a hurricane later this week,” the NHC continued

Earl is expected to produce additional rainfall amounts of one to four inches, with isolated storm totals of eight inches, across the Leeward Islands, US and British Virgin Islands, and Puerto Rico through Monday.

“Limited flash, urban, and small stream flooding impacts are possible. Rapid rises on rivers and mudslides in areas of steep terrain are also possible,” the NHC said, adding that gusty winds, especially in squalls, are possible across the northern Leeward Islands, the Virgin Islands, and Puerto Rico for a few more hours.