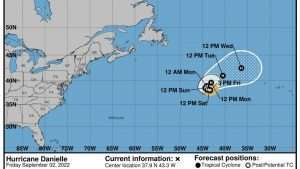 The storm is not currently a threat to any land.

The storm’s maximum sustained winds were clocked at 75 mph (120 kph), according to the U.S. National Hurricane Center.

The storm is centered about 885 miles (1,425 kilometers) west of the Azores and is drifting west at about 1 mph (about 2 kph). The hurricane center said the storm is expected to meander in the Atlantic over the next few days.

The tropical storm comes amid what had been a calm hurricane season. It is the first time since 1941 that the Atlantic has gone from July 3 to the end of August with no named storm, Colorado State University hurricane researcher Phil Klotzbach had told The Associated Press earlier.

Javier is moving northwest at 9 mph (about 14 kph).

There are no coastal watches or warnings in effect.